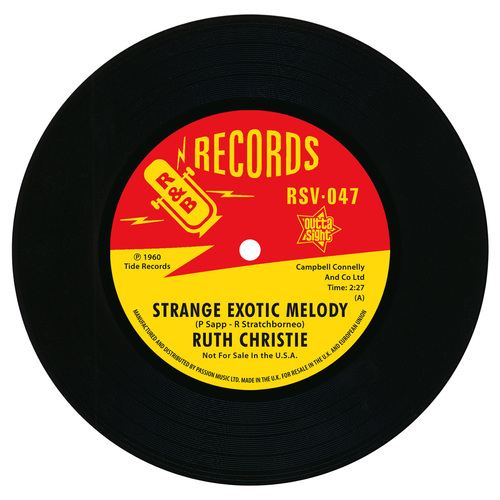 RUTH CHRISTIE worked with Johnny Mathis, Kris Kristofferson and the Beatles, among others, and coached Dionne Warwick on her first recording, according to her! What we do know for certain is that she was born Ruth Etta Stratchborneo in Los Angeles in 1939. From an early age she performed locally as a singer, dancer and actor before signing to Larry Mead’s Vita label as Ruth Christie. It was during her stay at Vita that she met her life-long friend Cathy Saunders (aka Paula Sapp, aka Paula DePores) and Rena Fulmer (aka Rena Wright) with whom she would co-write many songs under the collective name of Triune. The trio would also go on to record “Strange Kind Of Love” as The Honeycombs for the Pro label.

In 1959, with a loan from her father, Christie formed Tide Records and, shortly afterwards, it’s sister label Edit. The inaugural release, and Christie’s debut on her own label, was the standard “My Mother’s Eyes” which also saw a release on Liberty. Christie went on to release at least a further 8 solo singles on Tide including the Northern Soul collectable “Mystery Of A Miracle” in 1965. However, here we feature her earlier outings: “Strange Exotic Melody” (Tide 004, 1960) and “This Must Be Love” (Tide 0018, 1961). Both sides have found popularity in recent years on the European Popcorn and R&B scene. “Strange Exotic Melody” was re-released as “Your Love Is Torturing Me” (Tide 0077, same song, different lyrics).

Tide’s only hit was “Mojo Workout” by Larry Bright in 1960 but the label is known to collectors for the aforementioned “Mystery Of A Miracle”, “Chills” Alan Knight, “Trade My Soul To The Devil” Jimmie Williams and “Spirit” Third Point, amongst others.